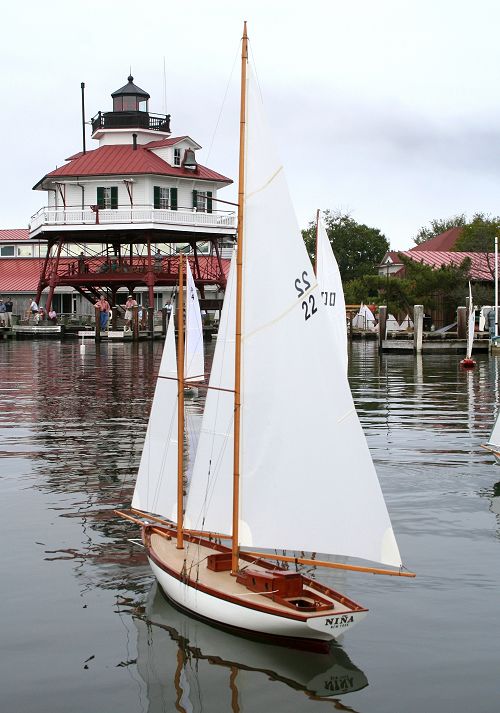 Al Suydam’s Niña eases towards the finish under an imperceptible breeze.

We visit R/C schooners and skipjacks on the Chesapeake

Couldn’t ask for much better weather– a high cloud cover to break the hot sun,  and a breeze warm enough for shirts and shorts yet quite adequate for even the solid and stout skipjacks. From my perch up on the Drum Point lighthouse, the proud and colorful landmark of the Calvert Marine Museum on Maryland’s Solomons Island, I had a gull’s-eye view as the latest heat of the morning got underway in the US Vintage Model Yacht Group’s “2005 Vintage Traditional Watercraft Regatta”. Lovingly crafted schooners, those stout skipjacks, and vintage Marbleheads with inlaid decking- they were here to race, and their skippers weren’t holding back. Cries of “Starboard!” and “You owe me a 360!” would rend the air, as would the thwack of fiberglass on pine followed by “Ooooh!”  A rescue skiff was keeping busy separating bowsprits from mizzen shrouds, while bemused spectators and museum visitors looked on. Yes, there are right of way rules in sailing– and NBA basketball is a non-contact sport too. No matter– after every heat, the skippers were in good cheer, and when necessary, the rigging was mended, and the “racer’s tape” came out to make hulls sea-worthy again.

The US Vintage Model Yacht Group (USVMYG) is a special interest group of the American Model Yachting Association (AMYA), dedicated to supporting older designs “no longer sailed in serious competition”. This includes classic Marbleheads of the Thirties, pond sailers, and support for those who operate sailing craft not intended for racing, such as the schooners and skipjacks present at this weekend’s competition. And what a location for tradition! Boats have been sailing the Chesapeake for centuries, and many are represented in the collection at the Calvert Marine Museum, from dugout canoes to a converted “bugeye” oyster dredger. The museum’s George Surgent coordinates a volunteer staff in the preservation of the historic craft, but also finds time to be commodore of one of the two local clubs hosting the regatta, the Great Schooner Society. The GSS is dedicated to the construction and operation of multi-masted sailing vessels. Another local club, the Solomon’s Island Model Boat Club, also uses the museum for a home base. SIMBC’s commodore, Buck McClellan, was the chief organizer of this year’s regatta. SIMBC has a variety of craft on it’s roles, but the club is most well known for it formula-built skipjacks, for which the club offers plans and parts.

The weekend’s events centered around series of heat races in the small harbor off the museum’s pier. Classes were: Vintage Marblehead, Vintage 36, Skipjacks, Schooners/Small, Schooners/Large, and Open. For the schooners, 50 inches length on deck was the break point. The open class was for “anything else”, and instead of first to finish, the Open Class winner was judged on consistency of lap times. In addition to the racing, the schooners were subjected to static model judging– and it should be made clear, these are not merely purpose built r/c racers, but true scale models of operating vessels.

For eye-catching appeal, it’s hard to compete with Richard Roger’s Pride of Solomons, a model of the Pride of Baltimore II, which herself is a currently operating modern recreation of a topsail schooner Baltimore clipper. The Pride of Solomons didn’t race this weekend, but she did make a demonstration run, gracefully working out into the harbor and back.

But the competition was present, and in force. The brothers Pratt from Cincinnati, Dick and Tom, brought their nearly identical Bluenoses with their beautiful attention to detail, carried even down inside the hulls to the mountings of the r/c gear, and to the neatly engineered transport dollies for trundling the boats around the yard. South Carolina’s own Andrew Charters gets the “most toys” award, even though he only brought five of his schooners to the meet. Andrew specializes in the fast fishing schooners of the Grand Banks and the racing craft they spawned- in addition to Bluenose, you’ll find Cicely, Columbia, Puritan, and Gloriana amongst others in his collection. And when you see these craft, you’ll quickly realize that transportation will be an issue. Unlike an r/c tugboat which can be slipped in the back of a car, skippers like the Pratts and Charters resort to trailers– a narrow custom unit for the Pratts’ twin Bluenoses, and a horse trailer for carrying up to six of Charters’ schooners. Others will lay a rigged boat flat in a minivan, or take the time to derig and unstep the masts for more compact modes of transportation.

A wide variety of schooners complimented these big boats- Surgent’s rendition of a Carolina sharpie, as well as one from David Querlin of Ohio, would both find the the occasional light air to their advantage. Al Suydam’s yacht Niña would place well in static judging and sailing and take top honors in Schooners/Small.

But the schooners weren’t the only scale craft sailing this weekend. This region is known for skipjacks, and the SIMBC made sure that the little oyster dredging craft was well represented. The SIMBC’s founders include the museum’s former master carver, James LeRoy “Pepper” Langley, who before his passing had designed and built a model of a Chesapeake Bay skipjack. The plans of this model have been translated into a standard design for a 48 inch skipjack, and the standard is used for formula construction and racing of skipjacks at SIMBC. In fact, the design has proven so popular that the club offers the plans, sails, and cast keels for sale (see web link at end of article). The club members can choose to build their skipjacks as highly detailed models, or in a simplified form, but all are held to the standard outline and weight, and all are welcome to come racing at the club’s events.

One of the most nicely detailed skipjacks came visiting from Long Island with Bob Seiden. Bob tried to convince me that it’s rough racing up in New York, so he’d have no problem getting through the crowd here. And yes, wasn’t that Bob just now yelling “Starboard!”?

The marina at the museum features two small finger piers jutting out into the harbor, one higher than the other.  The competing skippers would crowd onto the higher pier like a flock of gulls settling onto one too few harbor pilings, looking for an edge in parallax as well telltale signs of breeze. When I moved my vantage point to the chase boat out by the far mark, I could tell how hard it was for the skippers to judge the distance– some would turn inside the mark, seeing their error too late and earning themselves an extra lap around the buoy… others would sail several boat lengths clear of the mark just to make sure, but would lose precious position in doing so.

Always amazing to me is the start of any sailing race– the jockeying of boats in constant motion, as skippers try to judge wind and clock in order to have their bows just before the start line, just before the gun. Compounding the challenge for this regatta was the small cove that the boats were penned in for the start, with barely enough room for the big schooners to maneuver, and with odd shore breezes to deal with… but they were dealt with, and clean starts were more common than not.

The course had an arrowhead shape which ensured a full set of sail settings– a tacking run out into the harbor, a downwind run back, a broad reach across the base, and back out again. Wind conditions varied from a fair 10-15 knots to almost dead calm at rare moments. But by the end of the weekend, the full schedule of races was finished with time to spare, in no small part due to the excellent organizational efforts of the SIMBC team led by Buck McClellan. This was recognized by the regatta participants, who voted to give Buck the “Sportsmanship” award for his leadership efforts.

The “Long Distance” award went to David Ward of Monterey, Ca., though Chris Bertucci of Texas might have thought he had a shot at it!

The rest of the results:

This was an experience not to be missed, seeing fine models, fun racing, and great people in a wonderful setting. The 2006 Vintage Traditional Watercraft Regatta is scheduled to be held in September at the Mariners’ Museum in Newport News, Va., but check at the listed websites for further details as the date approaches. Highly recommended!

Find it on the Web: